There’s a one in 500 chance of a supervolcano erupting in the next 100 years. 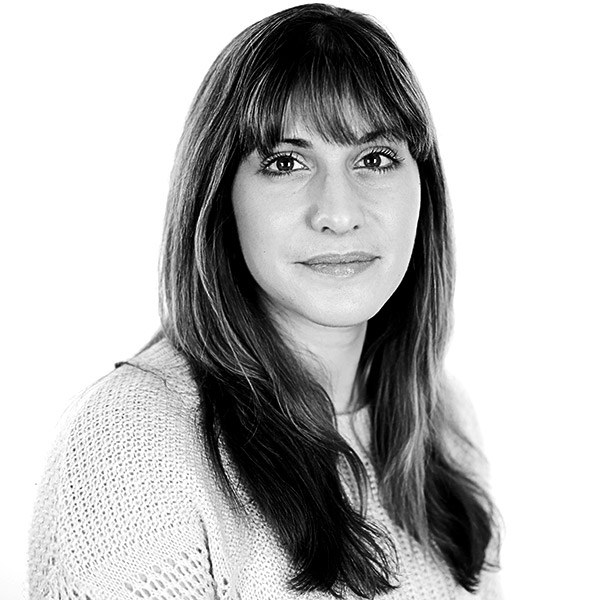 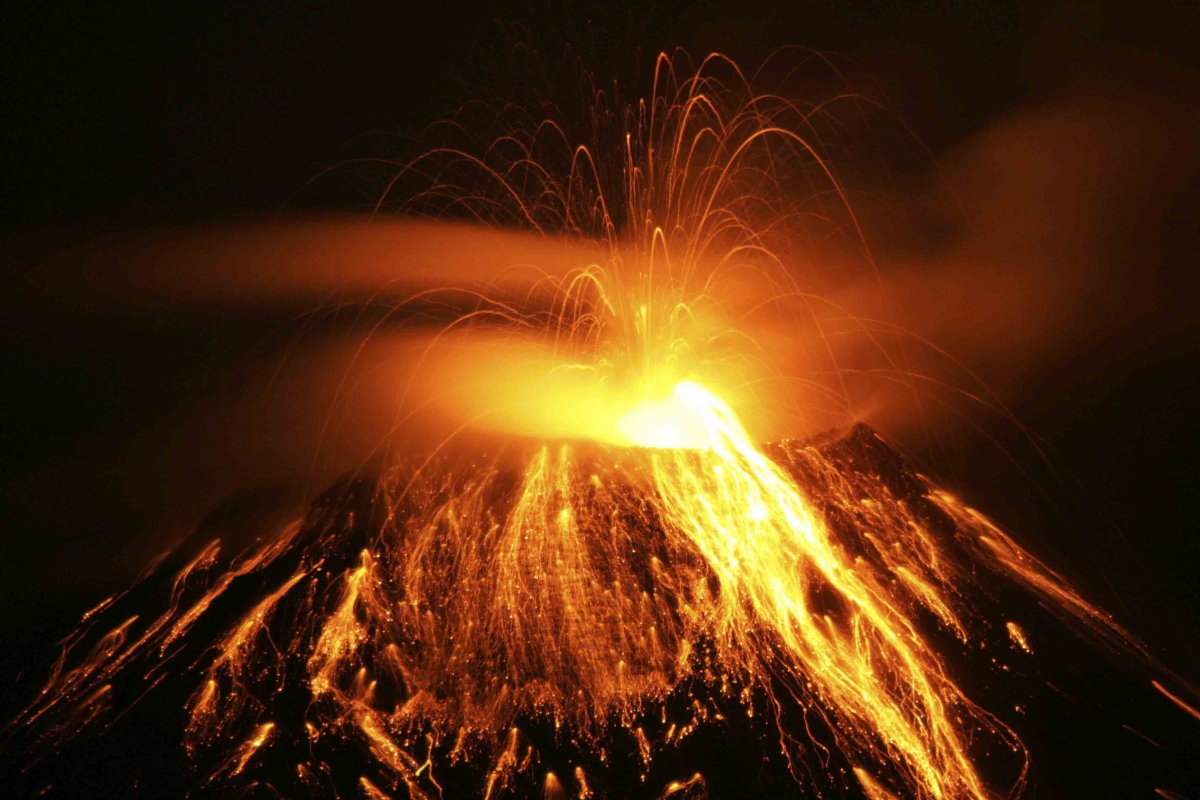 Supervolcanoes are loosely defined as volcanoes that can eject more than 1,000km3 of material during an eruption – around 1,000 times bigger than a normal volcano. These eruptions measure magnitude 8 or more on the Volcano Explosivity Index (VEI).

In any given century, there is around a one in 500 chance one of the world’s supervolcanoes will erupt. The consequences of such an eruption would depend on where it took place. Not every supervolcano on Earth has been mapped, but there are thought to be several dozen in existence.

Here’s a closer look at some of the best known supervolcanoes – and what we currently know about them.

Yellowstone is one of the best known supervolcanoes. The caldera formed as a result of three supereruptions over the last 2.1 million years – the Huckleberry Ridge eruption, the Mesa Falls eruption (1.3 million years ago) and, most recently, the Lava Creek eruption 630,000 years ago. The volcano sits beneath the Snake River Plain-Yellowstone hotspot – regions where the mantle beneath is hotter, meaning it melts to form magma.

In 2015, scientists announced Yellowstone has a magma reservoir four times bigger than its chamber sitting beneath it. They said this could make it the biggest magma reservoir in the world, with a volume of 46,000km3 – big enough to fill the Grand Canyon 11 times over.

Yellowstone has not erupted for 70,000 years and it is not expected to erupt anytime soon. At present, the chance of a massive eruption in the next year is one in 730,000 or 0.00014%. If it were to produce another massive eruption, however, most of the US would be covered by a blanked of ash, crop production would largely cease and there would be global cooling for as long as a decade. 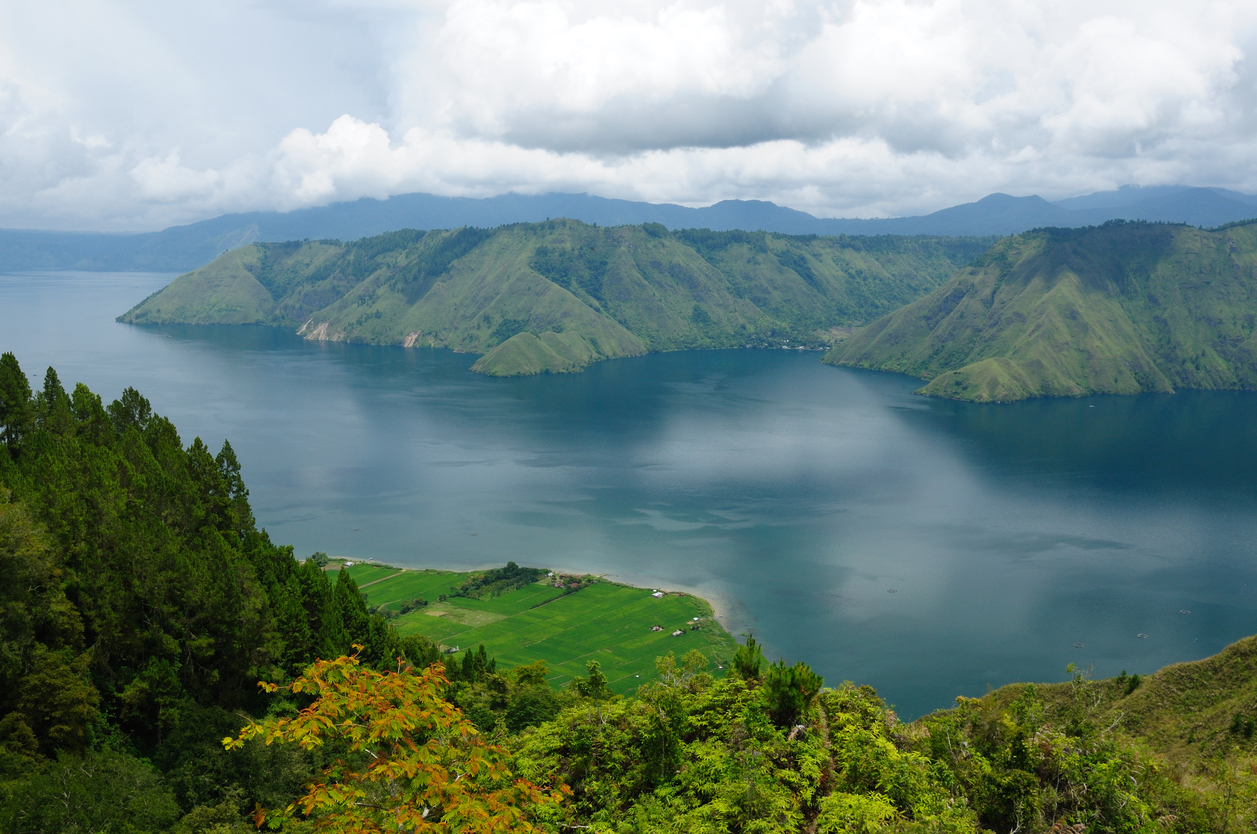 Lake Toba is one of the worlds’ biggest calderas, measuring 35km by 100km. An eruption 74,000 years ago was one of the biggest in history, ejecting 2,800km3 of material. The eruption was so big it caused global temperatures to plummet for a decade. It was even suggested the eruption almost drove humans to extinction as it coincided with a population bottleneck – but this theory has since been dismissed.

The volcano is not expected to erupt for thousands of years, but when it does it will likely produce another supereruption, scientists have said. By producing a model of the volcano, researchers show how a magma reservoir is growing under the caldera – showing its “magma-generating engine continues to be active”.

“It is probable that, in the long term, large eruptions will occur repeatedly until the Investigator Fracture Zone, which is the major source of the supervolcanism, subducts beneath Toba,” the scientists wrote in Nature. “The time that has currently passed since the last supereruption (74,000 years) is too short in comparison with the periodicity of large volcanic events at Toba. The critical mass of the molten magmas and volatiles in the upper crust has most likely not yet been achieved and the next supereruption may be expected only in some dozens of thousands or hundreds of thousands of years.” 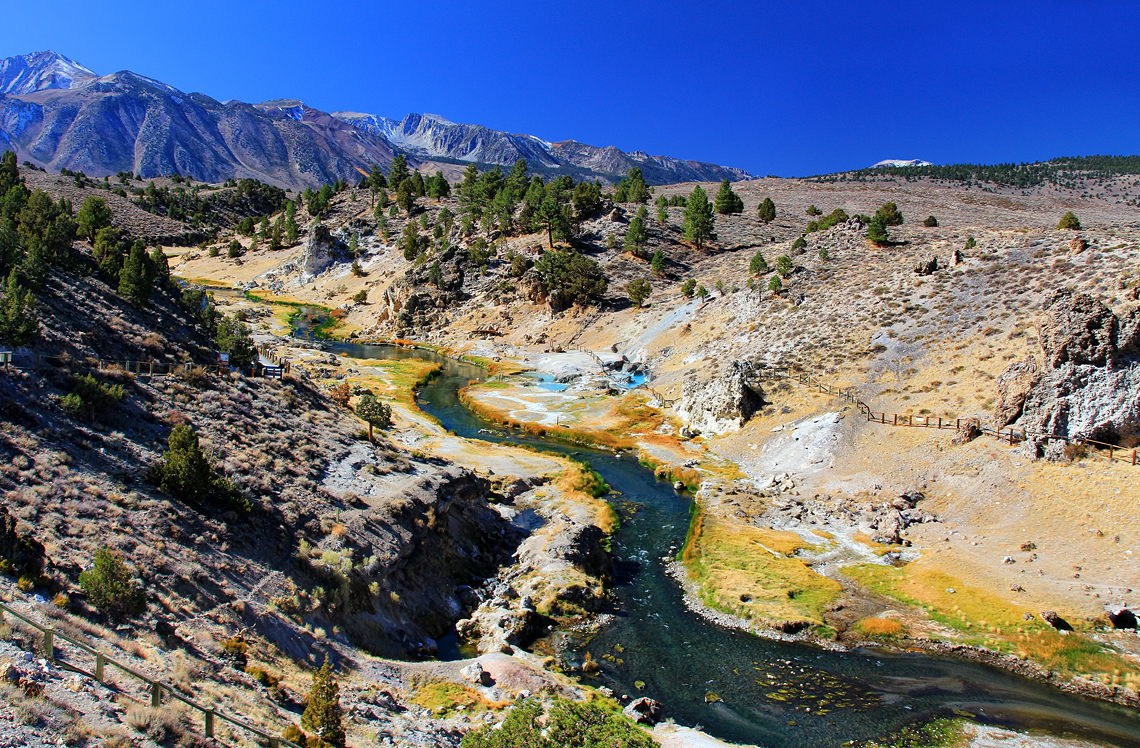 The Long Valley Caldera was created by the Bishops Tuff supereruption around 760,000 years ago. Scientists believe the eruption produced huge pyroclastic flows that covered an area of over 2,200km3, burying the existing ground to a depth of almost 200m. Ash would have covered much of what is now the western US. The volcano has been monitored since 1980. A swarm of earthquakes revealed the central part of the caldera had started rising up. This unrest continues to this day.

Research at Long Valley is currently helping scientist to understand how long it takes for supervolcanoes to build up the magma needed for an eruption – and how much notice we would get before it did blow. Recent research indicates that the huge magma bodies required could exist for just a few thousand – or even hundred – years before eruption.

Furthermore, the same team also found we would have just a years’ warning before an eruption at Long Valley. By studying quartz crystals from previous eruptions they were able to work out how fast the rim of the supervolcano grew. This, in turn, allowed them to establish the speed of decompression (which precedes and eruption) – and most took less than one year.

The last supereruption at Taupo Volcanic Zone was 26,500 years ago, with another, larger eruption taking place 340,000 years ago. Since the last eruption, part of the caldera has flooded – becoming Lake Taupo. Its biggest eruption in recent history – the Hatepe eruption – took place around 180 CE and is believed to be biggest eruption on Earth in the last 5,000 years.

At present, Taupo Volcanic Zone is one of the most active in the world. Should an eruption similar to the Hatepe take place today, it would be big enough to destroy the central North Island. Scientists recently announced a new magma chamber appears to be forming in the Bay of Plenty – which sits within the volcanic zone. Scientists said long-term uplift indicates the continuous uplift of magma.

In 2016, it was announced a grant had been given to map eruption scenarios for Taupo. “The modelling will effectively allow us to see in 3D where the ash clouds would travel, depending on climatic factors including seasons and wind directions,” Auckland University’s Dr Simon Barke said. This will allow us to forecast how thick the resulting ash deposits would be around the North Island. We’ll be able to model ash fall for different sized eruptions from the Taupo caldera.”

The Valles Caldera in New Mexico is the oldest of the US’ supervolcanoes. It formed 1.25 million years ago when it produced a massive eruption, which left a 20 x 23km depression in the ground. The volcano continued to erupt until around 40,000 years ago.

On average, the volcano experiences one eruption every 50,000 years – having had around 25 since its formation. “Thus, on this crude statistical basis, we might expect the next eruption in another 10,000 years or so,” the USGS said. “But the length of time between these twenty-five eruptions is highly irregular, so predicting the next eruption on eruption frequency is not realistic.” Another massive eruption like the one 1.25 million years ago is unlikely, scientists say. 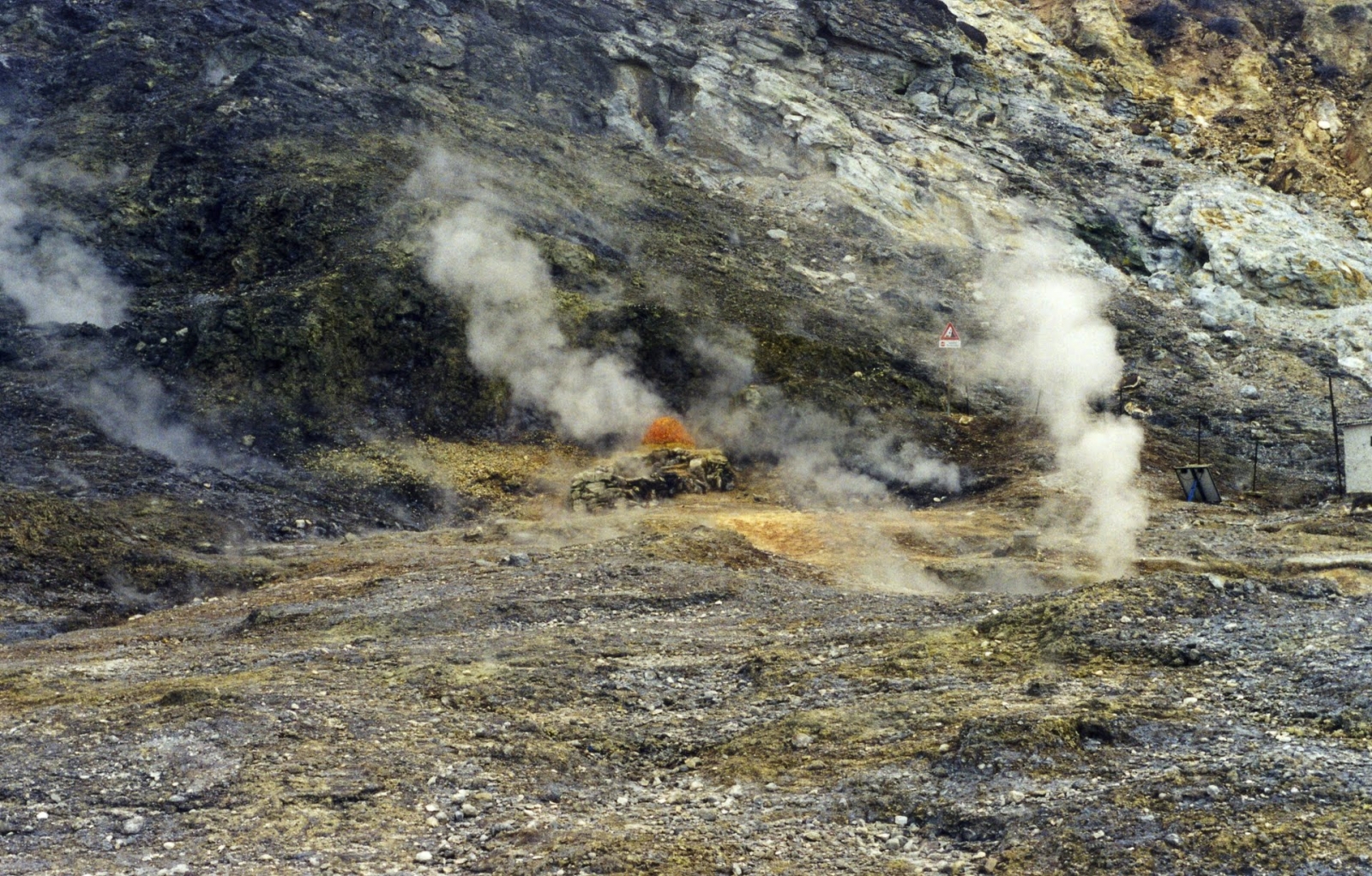 Campi Flegrei – also known as the Phlegraean Fields – is considered one of the most dangerous volcanoes on Earth because of its location, just over 10km from the city of Naples, which has a population of one million. It last erupted around 40,000 years ago and was at one point implicated in the extinction of the Neanderthals from Europe (although evidence has since been dubbed ‘insufficient’).

The caldera consists of 24 craters and volcanic networks and is mostly situated underwater. It gained widespread attention in 2009 following suggestions it could be about to erupt. Scientists monitoring the volcano, however, recently said this is not necessarily the case. They reported the ground around the volcano has been moving upwards – rising up 38cm in the last decade – and that this was the result of hydrothermal gasses, not the accumulation of magma, as it had been thought.

Further research released in December last year showed the site is approaching critical pressure – the point needed for an eruption to take place. Researchers found the content of the gasses beneath the ground is changing – one of the key signs of critical condition. The study authors noted, however, there is no evidence to suggest an eruption is imminent.

The biggest volcanic eruption in history 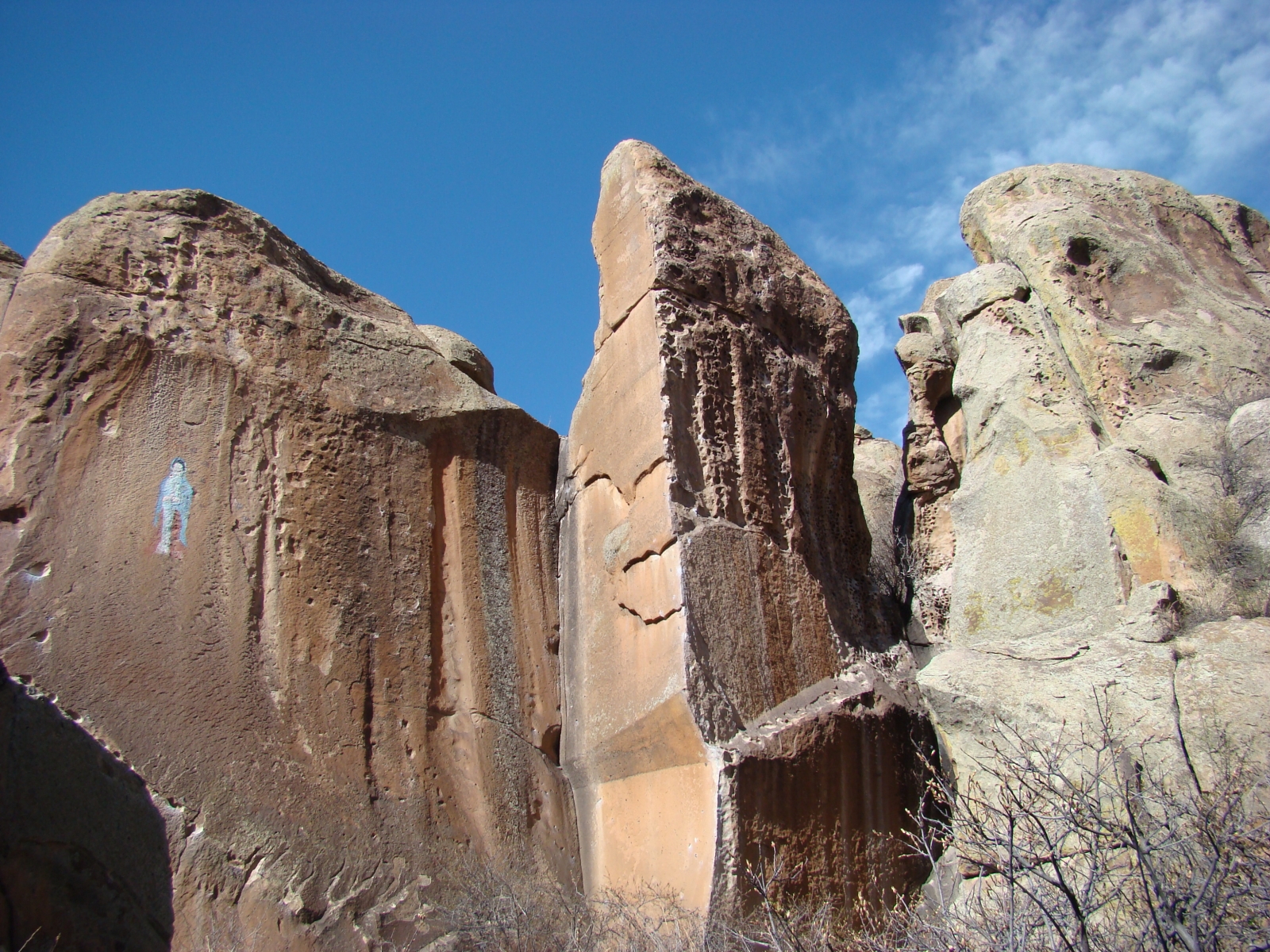 The biggest eruption ever to take place on Earth formed the La Garita Caldera in Colorado, US. It took place 27 million years ago and saw 5,000km3 of material ejected. It devastated the area – covering an area spanning 30,000km3 with ash 100m deep – the deposits are known as the Fish Canyon tuff. It is the only eruption to reach nine on the Volcano Explosivity Index.

La Garita is the world’s biggest caldera, measuring 35 x 75km. Because of its immense size, it took scientists over three decades to fully establish its size. It poses no risk of eruption, having been declared extinct.